For my 40th birthday I got the Leatherman Surge. The Leatherman Surge and the Wave are popular multitools that I like to use myself and often have with me. The question arises in what exactly do they differ, what are the advantages and should you prefer one to the other? I would like to write about these questions and more here. 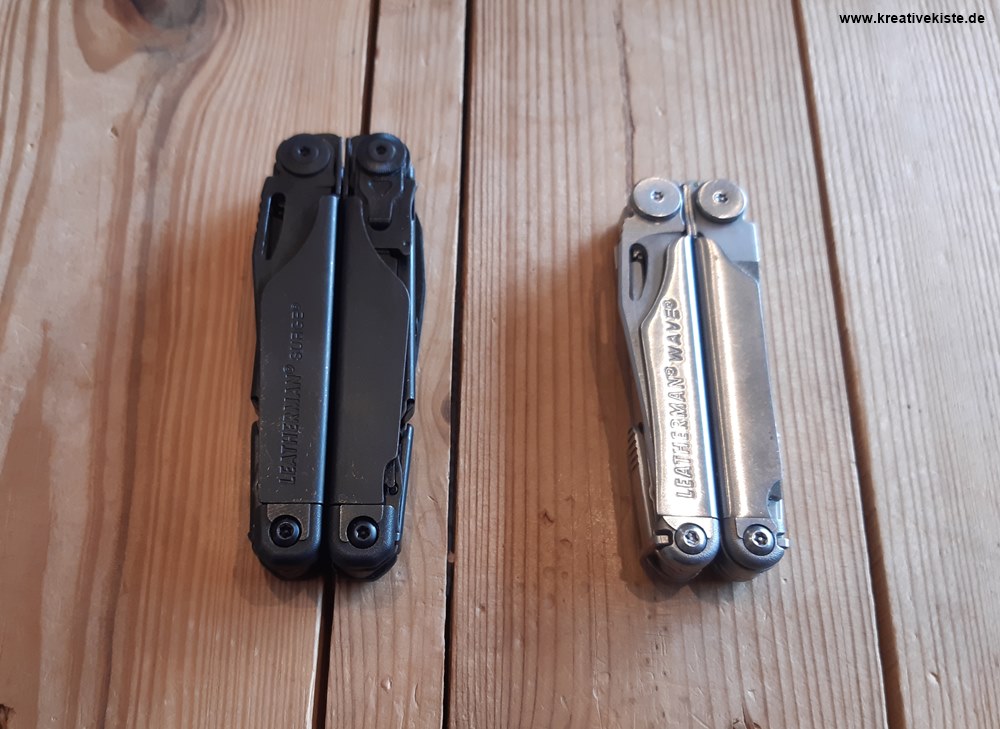 At first glance, the two multi-tools look very similar except for the size. The Leatherman Surge is actually quite a bit bigger than the Leatherman Wave. Of course you have more grip and can use more force during the surge. Due to its size, the Surge also weighs around 335 g, while the Leatherman Wave weighs only 220 g. If you wear the Surge on your belt or in your pocket, the size and weight make a clear difference. So the big advantage of the surge, the size, is also the biggest disadvantage, but let's take a closer look at the tools first. 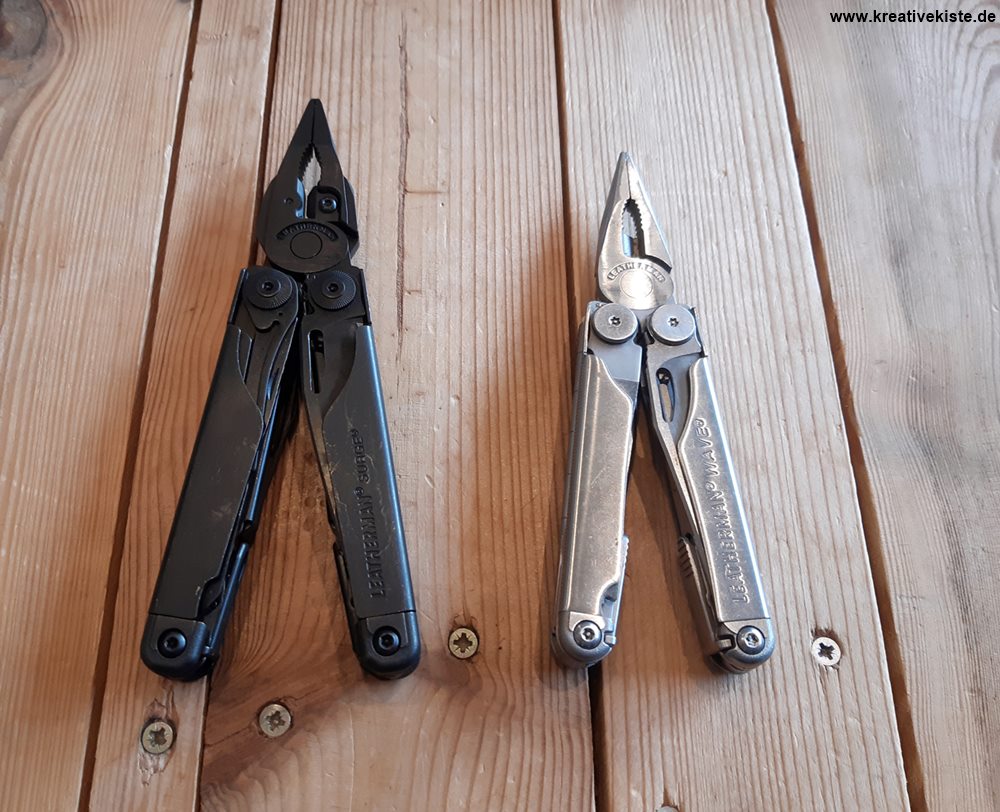 Tools of the Leatherman Surge and Wave 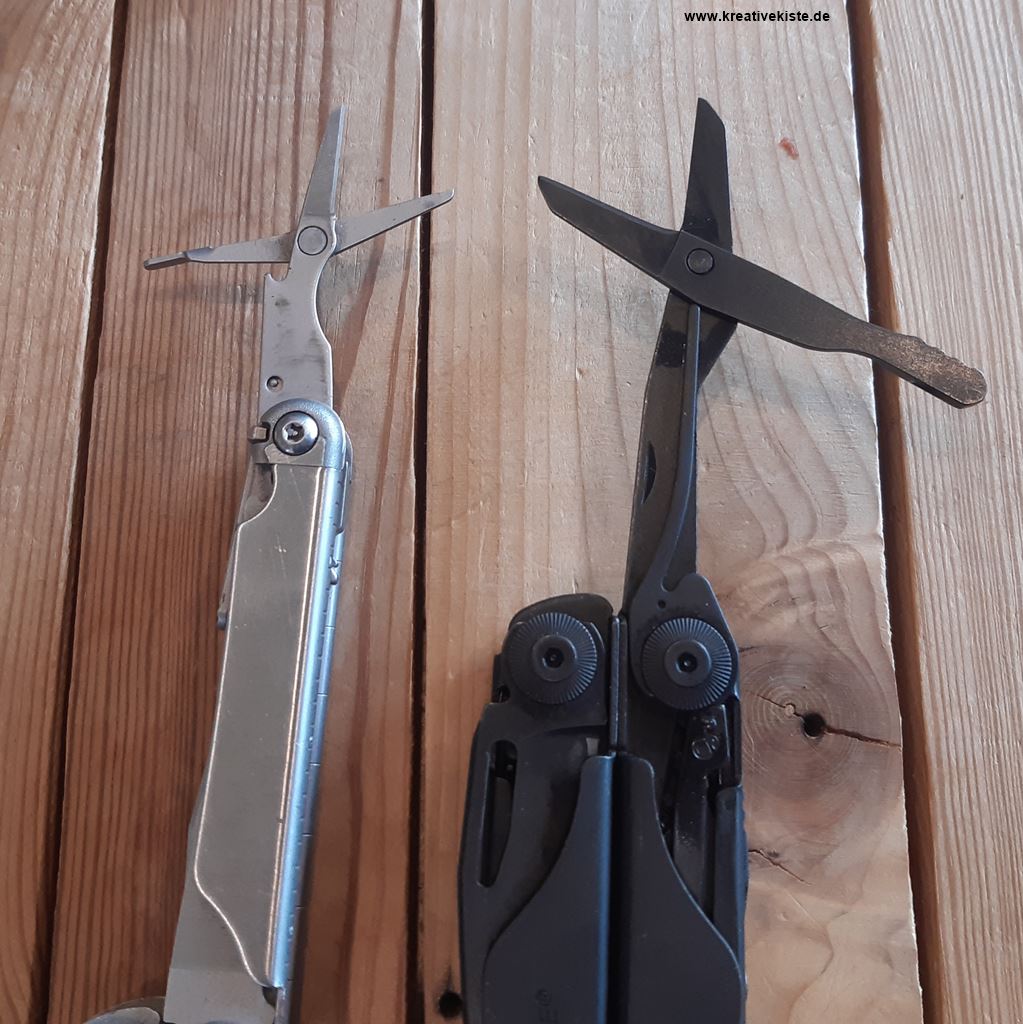 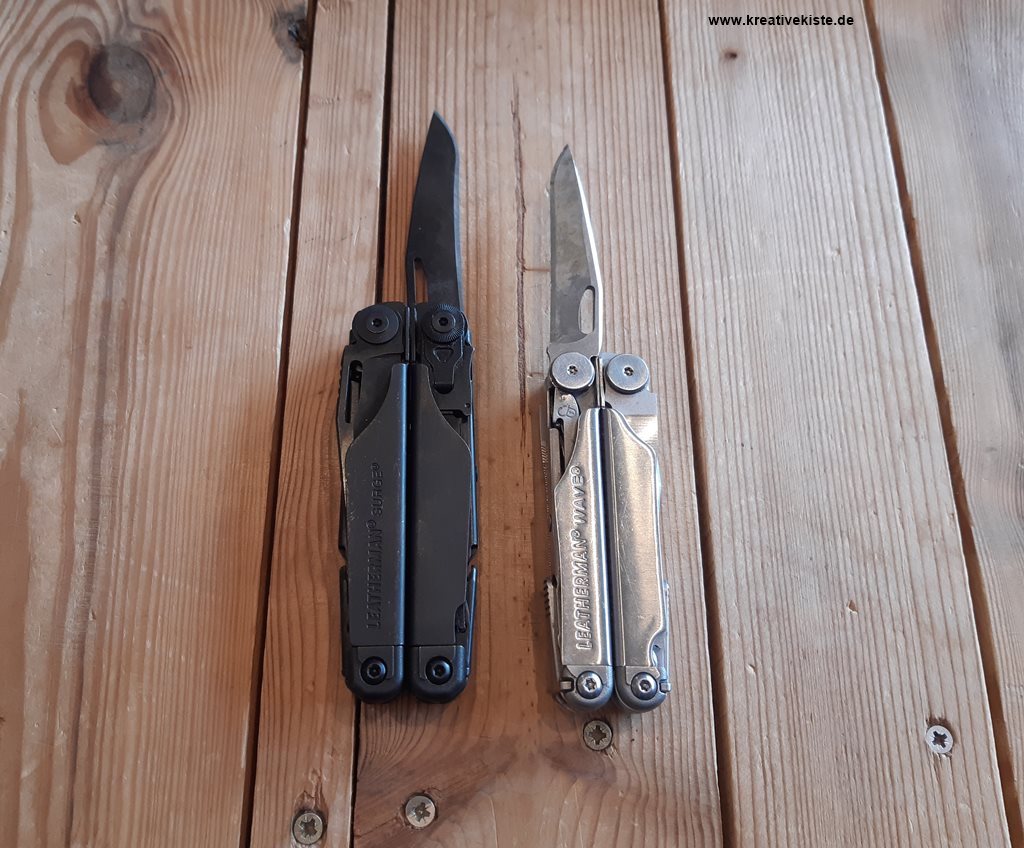 Tools that are accessible from the outside

One of the most important features of both multitools are the tools that can be accessed without opening the tool. So you can take the tool out of your pocket with one hand, open it and work with it directly (here it is particularly important to pay attention to the German gun laws). The two multitools are not the same.

The SDS insertion system on the Leatherman Surge

The surge has an advantage due to the SDS plug-in system. So you have the saw or file ready and you can also use the large scissors. If you use the scissors a lot, this could be a reason to use the surge. If, on the other hand, you often use the saw and the file, these two tools are directly available in the Wave, which speaks in favor of the Wave. As can be seen in the table / bulleted list, the Leatherman Surge has a few tools that the Wave does not. Sure, if you look at the difference in size between the two tools. Nevertheless, as already mentioned, the differences between the tools are not that great. The only exception is the SDS plug-in system that only the Surge has. 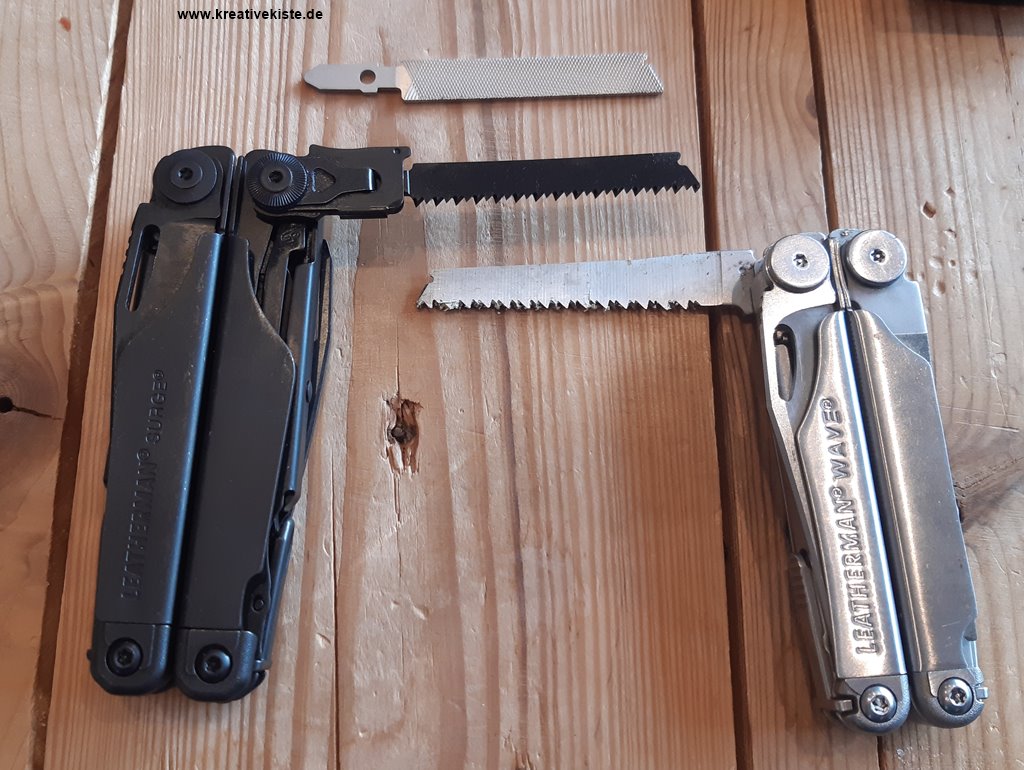 With the Leatherman Surge, the saw or file is accessible from the outside and so come with a case in which there is still space for another SDS tool. The real big advantage of the SDS connector system is not only that you can simply replace the file or saw when they get blunt. But that different saws and files can be used.

Both tools have the most commonly used screwdrivers (slotted and Phillips) that fit into the large bit holder. The Leatherman Wave also has a small bit holder in which a very small screwdriver with a flat or cross head is inserted. This can be very useful if your glasses are loose or if electronic devices need to be repaired. The Surge does not have this small bit holder, but it still has a self-learning screwdriver. So if you often need a small screwdriver then you should opt for the Wave. 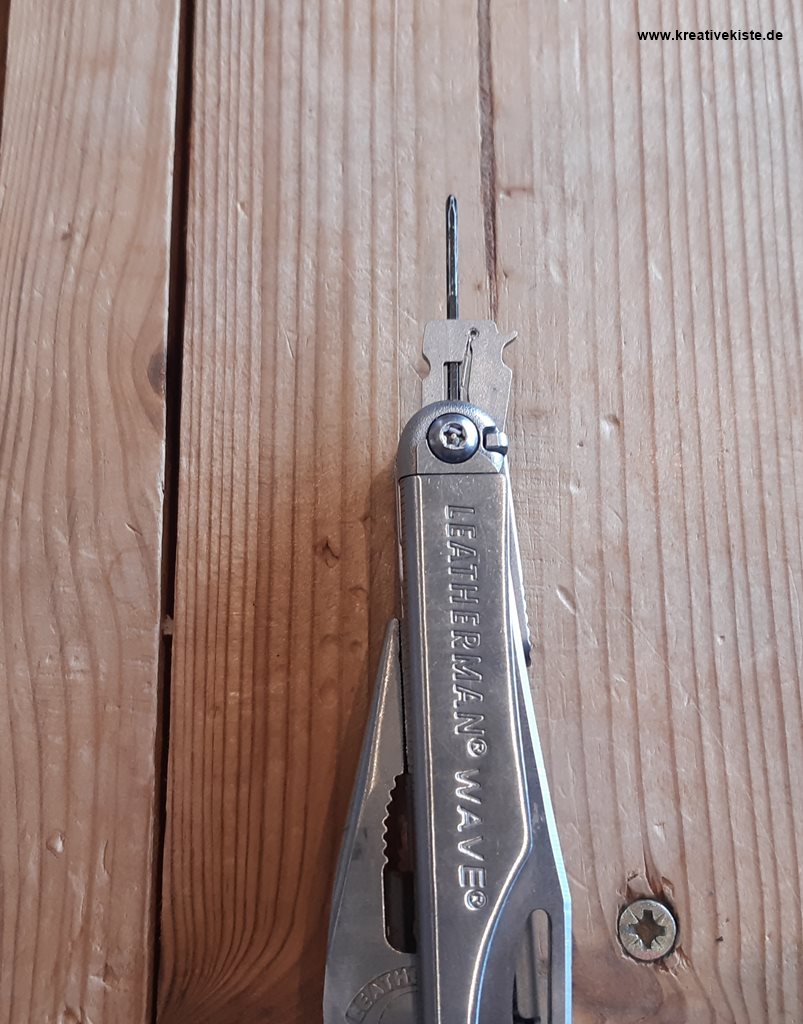 Both multitools are very powerful, have similar tools and have everything on board that you need on the go. Both are compact toolboxes, only one is slightly larger than the other. The Surge is intended for hard work, where you can really "press", belongs in the glove compartment or in the tool box and has an SDS system. The Wave, on the other hand, is more compact, easier to take with you, has a small screwdriver and is therefore suitable as an everyday carry that can be carried on a belt or carried in a trouser pocket. 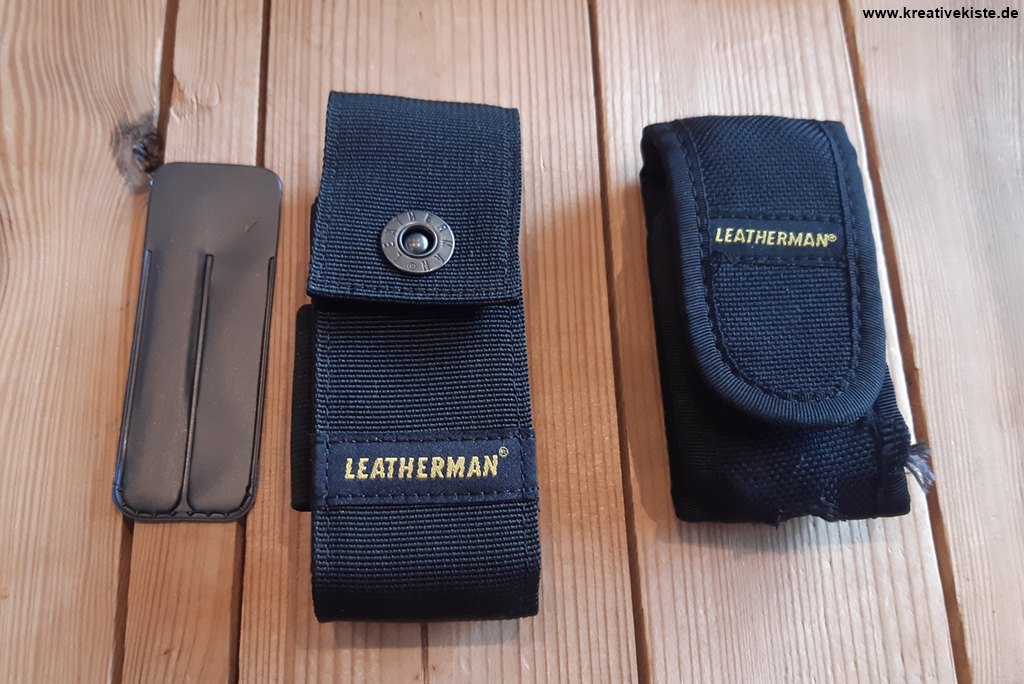